We are very lucky to have a number of girls at Shrewsbury High School who are part of our National Schools Equestrian Association (NSEA) squad and who have been very busy over the summer holidays on their trusty steeds! 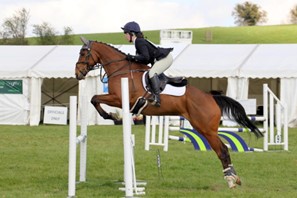 Isabella is a member of the Wheatland Hunt Pony Club, and she came 4th at the Pony Club Area Eventing and 2nd at the Area Pony Club Show Jumping competition.  Isabella has qualified for the British Eventing Area Festival in September, where she could qualify for the Grassroots British Eventing Championships at Badminton next Spring.  As well as eventing, Isabella also is a bit of a dressage diva, and she competed in her first FEI pony U25 competition where she was respectfully placed in 7 out of the 8 classes she entered.  Congratulations to Isabella and we cannot wait to have you represent SHS at some NSEA competitions, and good luck at the Area Festival! 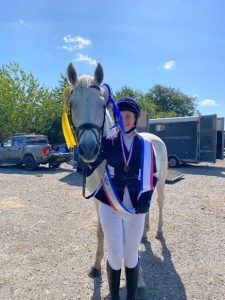 Matilda qualified for the National Pony Club Grassroots Championships at Eland Lodge for the Sir Watkins Williams Wynn branch of the Pony Club.  She has also gained a reserve championship sash in the 80cm Show jumping Championships at Reaseheath, as well as a 3rd podium position in the 70cm class.  Many congratulations to Matilda. 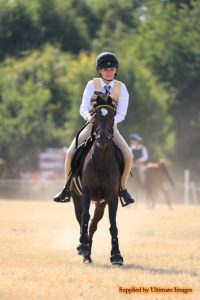 Following on from show jumping, we move to a different event – the Mounted Games.  This is a Pony Club discipline but not competed for at the NSEA events.  We have two Year 11 members of our NSEA squad who have qualified to ride at the prestigious Horse of the Year Show in October.  Both Grace Learoyd-Hill and Natalie Brick will be riding in the Naylors Mounted Games Championship competition in the yellow sweatshirts and representing the Wheatland Hunt Branch of the Pony Club with their fellow team-mates.  250 teams start the journey to gain one of the six golden tickets, so it is a tremendous achievement for these riders. 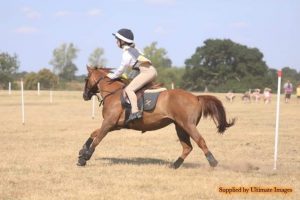 One more rider who has been successful in Mounted Games is Rosie Brick.   This year she achieved equal 3rd in the U18 European Individuals Championship, and then she won the U18 World Individual Championships which was held at the end of August.  Rosie was awarded the Sylvia Short prize at Speech Day this year and I think we can say that she used the award to good use entering the World Individual competition. 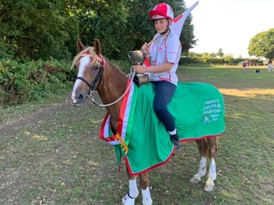 These are exceptional results in this discipline for all these riders and we look forward to hearing the results from the Horse of the Year Show in October.  Congratulations to all the girls involved.

However, sometimes it not all about competitions – keeping ponies and horses fit and well during the summer is also important.  Tess Weston had a lovely time at camp with the Albrighton Pony Club, and Flo Parker White and Maddie Osborne have been recuperating after their GCSEs but will be ready for the Autumn and Winter season.

Brilliance and Grit from our wonderful Year 11 girls
School of the Year Finalists!